Morpheus of a regular person 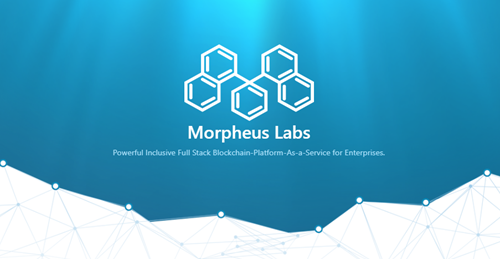 Morpheus of an airdrop lover

Morpheus Labs. is a platform for enterprises which allows businesses to develop their own blockchain infrastructure, choose an optimal blockchain, create and support their products through the use of applications and prototypes.

25% of MITX were offered for sale. Initial metrics were not very attractive for an average investor and allowed the whales to unload their tokens with massive bonuses and no lock-ups. However, when the hype died down and the sale stuttered, the team decided to burn 20% or 200mil. tokens to reach the max. supply of 800mil. MITX. Over a period of time, a total of 45% of all the tokens will be gradually burned. 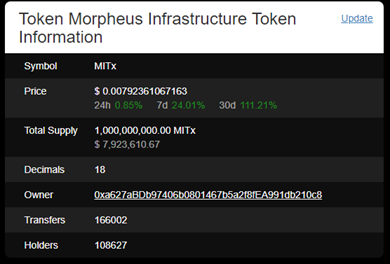 According to the CEO, the current state of affairs is as follows:

In January, 2019 the team launched their platform but the news didn’t really move the price in the expected direction. However, after an announcement of a large token burn and the fact that SFA, their fin tech investor, became a member of NTUC (National Trade Union Congress) in Singapore, the price has started to creep up.

Another major pump (2x – 3x) happened in the beginning of February and was blamed on a manipulation from one of the large clients.

The latest 2x peaked on March, 6th and could be connected to the ongoing SmartDrop that is being done together with QuarkChain.

They call it BPaaS – blockchain as a service, i.e. a convenient API that allows a seamless blockchain integration with one click of a button.

Products of Morpheus Labs will be accessible through a private depository. The current number of apps is very limited though.

Right after the registration, users get access to a personal repository where, right after the payment is cleared, they will be able to load necessary code for their apps. The platform is a sort of a link between the users and the developers. Morpheus Labs grant full transparency, support and safety in exchange for a commission in MITX when purchasing an app form their store.

As you can see from the pictures below, the interface is quite clean with no clutter present. Users can choose a suitable option that depends on their goals and financial requirements. They can also choose to co-operate with the Morpheus Labs team members registered on the platform.

Users are able to create their personal workspace though Gitlab, use existing apps and upload their own, as well as work within the blockchain of their choice. Everything comes with a full support from the team, including manuals and technical documentation.

Frankly speaking, the website is a bit raw and definitely needs some overhaul. A good thing is that they recently switched to a good hosting provider.

The website gets around 10k views a month where 50% of all the visits come from Singapore with Romania, Vietnam, Italy and Germany following behind.

GitHub: github.com/Morpheuslabs-io. As soon as people started talking about the launchpad fever, Github became somewhat active. There are a couple of repos with theoretical stuff.

Among a number of other social networks, only Twitter and Telegram are worth some attention, while other are as attractive as your average ex back in high school.

Overall, the team is somewhat average with experiences ranging from IBM, UniCredit Group, and Asian fin tech firms to small companies that have nothing to do with blockchain or technology. There are a few software developers but all of them look good on paper. There is an obvious lack of the developers with blockchain specific skills though. There are representatives of Singapore, Vietnam, Taiwan and South Korea.

There is no need to write about one of them in detail. Instead, let’s focus on Morpheus Labs’s finest and brightest members.

The Blockchain Lead of this enterprise is Brian Zermeno.

What is he famous for, you ask? Well, he occupied a similar position in BWEX: a scammy ICO that promised a new generation exchange. The only promise they kept though was taking money from the investors.

He was also a member of ORBIS STO (ORBS) that had a plenty of red flags on its own.

The sale has been going on since November, 2018.

There is no need to continue any further.

Sang Duong Van – LinkedIn : blockchain developer with some experience in Java. Since 2018 was (and still is) a team member of veriTAG Pte Ltd, that is a Singaporean alternative to Te-food.

Dr. T.R. Yeap http://ye.sg/pub/rex/bio.htm – a true superstar with many patents and accomplishments to his name. The funny thing is that he is a one of the creators of a database of scam ICOs https://padlet.com/dryeap/icoScammers but still allowed a blockchain lead with a shady past to be a part of the project. Dr. Yeap is also an advisor to small projects like Smartpesa, Tokenize, Youroot/Treeblock.

Other advisors are quite average in comparison with a good experience in management, IT, and design.

Speaking of the technical part of the project, there are some uncertainties. Despite of a recent launch of the 1.0 platform, the crucial part of integration with other blockchain has been delayed till the end of 2019.

Stars and space look good but will they take us to the Moon?

We can see that they are on friendly terms with NEM, VeChain, QuarkChain, Nuls, Multichain, Neurochain, veriTAG Pte, Y3technologies (logistics services), ECXX (exchange of one of the co-founders, Branson Lee). Fintech partners: Sakae Fintech, SFA. Everything is hosted on Amazon Web Services (AWS).

Dragonchain, Nuls (which are also listed as partners), Oracle, Unibright and others. The idea itself is not new.

Address: 75 HIGH STREET #05 THE CO BUILDING SINGAPORE 179435. It looks like they are based in quite an attractive coworking space.

Unfortunately, the current crypto market is more prone to speculation rather than the products with actual use cases and technical foundation. That’s why projects like Morpheus Labs struggle to find real-life clients mainly due to prejudices concerning blockchain and cryptocurrency.

However, services like this can prosper if there is enough hype, good management and all-star partners: something that Morpheus Labs seem to be doing right.

On the other hand, if there are no actual clients the platform and the price of MITX will die off, and the investors could only hope for a mercy of a lonely whale willing to pump the token.

It was surprising to see discrepancies between the current team and the one from when they had during the ICO. Also, presence of the team members with murky past and the fact that they postponed some aspects of their roadmap might leave some people in a state of confusion.

Overall, Morpheus Labs seem to try to make the best out of the current situation and we hope that gathered $10mil will help with it.

To an average MITX holder, our advice is to take notes of recent partnerships and keep a close eye on the development of the project that, frankly, should have been done better considering all the factors mentioned in this research.